The Head of the Snake

The street gangs of Chicago battle each other every day for power and control of drugs. Innocent people, including children, have died in the crossfire. City police, the Feds, politicians, and neighborhood leaders have tried to fight and shut down the gangs in a variety of ways, but nothing has solved the problem. The inattention at all levels of government to the roots of the street violence is drawing wide criticism; racially biased zoning discriminatory lending and insurance policies,  police discrimination, “ghettoized” communities, generate a cycle of poverty and organized gang crime, rendering the neighborhoods dysfunctional. The gangs are just symptoms of a more serious social disease.

The Disciples, Vice Lords, and P-Stones, gangs that ravaged Cabrini Green and Robert Taylor Homes in the past, have been broken apart only to be replaced by a hundred other gangs.

In this high-level thriller, five former Marines who served together in a Marine Huey helicopter squadron in  Iraq and Afghanistan are now back in Chicago in civilian life dedicating themselves to taking back the streets. 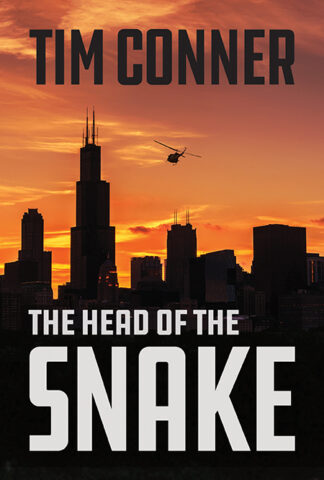 You're viewing: The Head of the Snake $16.95 Before WI tax
Add to cart