Cady and the Bear Necklace by Ann Dallman 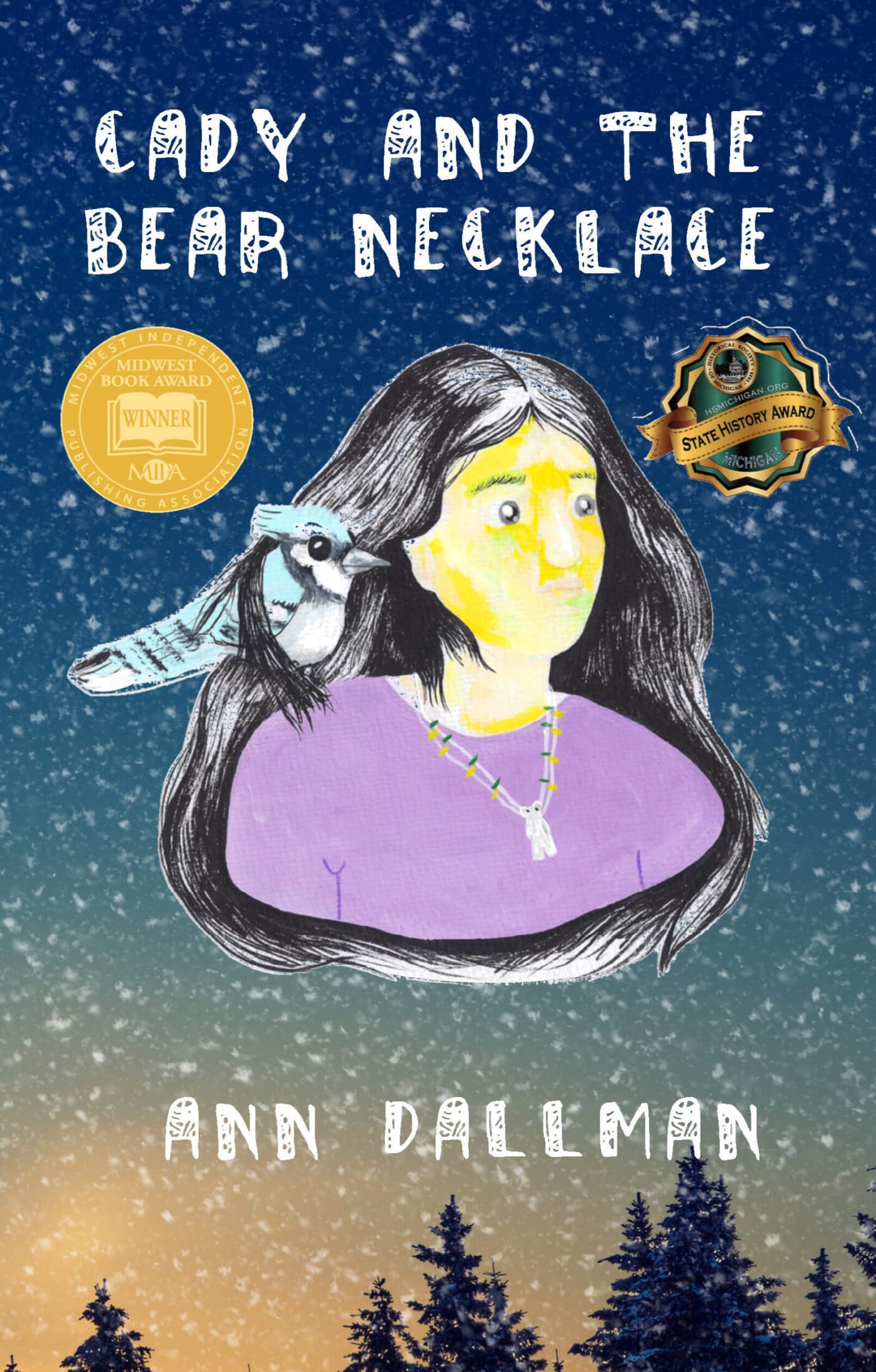 Ann Dallman’s debut middle grade novel Cady and the Bear Necklace is an enthralling tale that is equal parts mystery and first-love pangs. Cady Whirlwind Thunder is a Native American girl in the 8th grade at the Four Eagles school in the fictional town of Barnesville, Michigan, somewhere near the Keweenaw Bay area. Like many “rez schools,” Four Eagles encompasses all grades K thru 12 with a student body of less than 200 souls. Cady is trying hard to fit in and make friends since her move from a suburban Minneapolis-area upbringing about six months ago. Her dad has decided that attending an Indian  school would be her best chance to get a complete education in traditional lore, crafts and society. She is a self-admitted klutz at most crafts, including beading, and she relishes the chance to learn to be a traditional.

Cady’s father is a failed medicine man who lost his way when his mentor, who was his great-uncle, died. At a loss for what to do next, he served in the Army and is now a veteran on partial disability. Cady is still adjusting to living with Francine, her relatively new “step-monster” of two years, as well as the expansion of her family with baby Colson as a result of this new union. Francine is a young, 24-year-old and still negotiating how to be a parent and partner to Cady’s 55-year-old dad. Cady’s birth-mom deserted the family when Cady was just 6-years-old, after checking into a substance-abuse treatment facility and checking out with one of the other inpatients. All of this family turmoil has left Cady with a short fuse and prone to angry outbursts.

Cady has reached that particular age where she has a mad crush on a boy and absolutely no idea how to spark a romantic relationship. The object of her affection is the hunky John Ray Chicaug, a tall, dark and athletic all-sports Native American who’s about two years older than she. John Ray is also a traditional Indian, and, at least until now, he’s been too busy with inter-curricular activities to have time for a girlfriend. They meet here and there, often alone together, but it never seems to be enough to make them a pair.

Cady is a member of the Woodland Indian tribe, and Dallman gracefully weaves the text with both lore and relationships that help motivate the plot as well as educate the reader. For example, in an opening chapter, Cady discovers a sacred eagle feather discarded carelessly on the school grounds by an upper classman. This feather must be retrieved by the pipe-bearer, a sanctified elder who can relocate the artifact while honoring it. Said pipe-bearer is John Ray’s grandpa, one of several grandparents who will play a pivotal role in the drama. John Ray informs Cady that the respect and honor she has shown the spirit world will come back to her in the form of a “special task to complete or a mystery to solve.”

Ann Dallman, author of Cady and the Bear Necklace
Cady is drawn even closer to John Ray’s family by the need to interview another elder for her Indian Literature class project, who turns out to be none other than his grandma. This puts Cady in the funny position of cozying up to her prospective beau’s grandma before even meeting his parents or garnering more physical attention than a gentle pat on the shoulder by this putative boyfriend.

Cady, indeed, is given a mystery to solve, one that begins with her discovery of the titular Bear Necklace, which has been hidden under the floorboards in her own home for decades! Her journey to trace the origins of the Bear Necklace will require her to bring all her skills to bear while navigating and reconnecting with her extended and inter-generational family, as well as her quirky new spirit totem.  Each chapter title is shown in both English and Ojibwe languages so the reader has a chance to learn a couple dozen, should he or she desire to do so.

Author Ann Dallman lives in Menominee, where she has been a teacher for more than two decades. She has worked with students at the Hannahville Indian Reservation to produce an anthology, as well as editing a monthly regional magazine. She’s also the author of Sam English: The Life of an Artist (2009), a biography of a local Chippewa artist. Dallman writes what she knows and writes it well.

I strongly recommend Cady and the Bear Necklace to both middle grade readers and parents alike, because it is a compelling, character-driven novel with a rich cultural background and a positive message for everyone. I know I am eagerly awaiting the next installment in this empowering series about Native American youth in the U.P, megwetch to Ann Dallman.