Remembering Butch, Bruiser, Biney, Eddie, and the Rest of the 1957 Algoma Penguins and a Look Back at that Magical Year

A father taking a son to his first baseball game creates a magical bond between the two and provides the son with memories that last a lifetime. Such was the case with the author and his dad. Lovingly compiled and written by one-time Algoma resident Dennis Sell, REMEMBERING BUTCH, BRUISER, BINEY, EDDIE and THE REST OF THE 1957 ALGOMA PENGUINS & A LOOK BACK AT THAT MAGICAL YEAR is a colorful, nostalgic journey into the Algoma Penguins 1957 season. This 200-page hardcover book recaps each game of the city’s amateur baseball team, including box scores and season statistics, along with the lifetime journeys of each player following the 1957 season.

1957 was a memorable year in other ways as well.  Nationally, it was the beginning of the Civil Rights struggle, the American Bandstand television program going national, the beginning of the Space Age, and the move of the New York Giants and Brooklyn Dodgers to California. In Wisconsin, 1957 was the year when Milwaukee won the World Series title and a new stadium made its debut in Green Bay. Locally, it was the year in which pizza and Aunt Jemima came to Algoma and a summer in which collecting baseball cards was a craze among Algoma youngsters.

Don “Butch” Meyer, catcher on the 1957 Algoma Penguins, penned a nostalgic Foreword to the book, which includes more than 100 pictures. 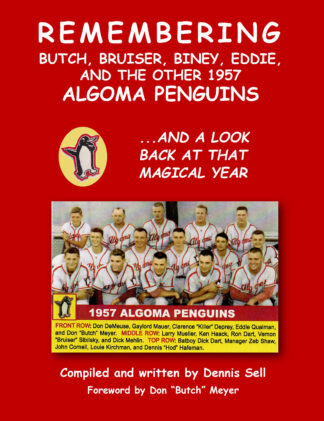 You're viewing: Remembering Butch, Bruiser, Biney, Eddie, and the Rest of the 1957 Algoma Penguins and a Look Back at that Magical Year $34.95 Before WI tax
Add to cart