From Coin Toss to Championship…1971: The Year of the Milwaukee Bucks

FROM COIN TOSS TO CHAMPIONSHIP—1971: The Year of the Milwaukee Bucks is the definitive, game-by-game history of the NBA champion Milwaukee Bucks by renowned Wisconsin sports historian Rick Schabowski. This is the in-depth story of how the new Bucks franchise won the rights to negotiate with Lew Alcindor (later Kareem Abdul-Jabbar) by the single flip of a coin, traded for the great Oscar Robertson, and became NBA champs.

Pairing the “Big O” and the ascending Lew on a dynamic all-around team, the Bucks fought back fierce challenges all around the NBA, posted a 66-16 regular season record, and nearly coasted to hoisting the NBA championship trophy.

In Coin Toss, Schabowski has served up a full menu for traditional Bucks fans who want to relive the championship year, for young fans who want to know about the tradition and excitement that the current Bucks build on, and for true basketball buffs who want to set the record straight.

As the new Milwaukee Bucks make believers of everyone, From Coin Toss to Championship is destined to become a classic and a vital part of Milwaukee’s, Bucks’, and NBA history. 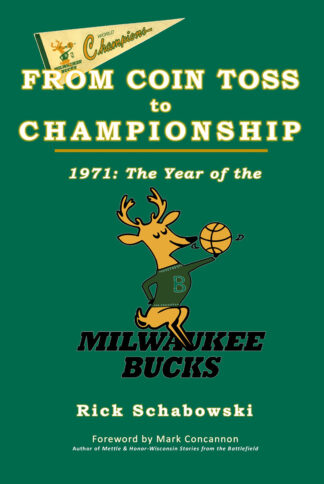 You're viewing: From Coin Toss to Championship…1971: The Year of the Milwaukee Bucks $18.95 Before WI tax
Add to cart