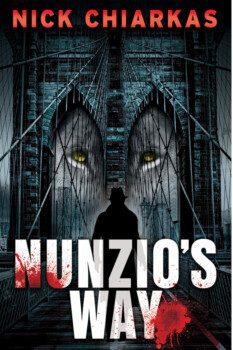 Here are two stories about longtime Madison resident Nick Chiarkas, who spent 22 years as the director of the Wisconsin State Public Defender agency before deciding, in his 60s, to try to write novels.

Earlier this year, Chiarkas was in a short line waiting to order at the Middleton Barriques. The woman ahead of him asked for coffee and a croissant.

She was holding a book. To Chiarkas’ astonishment, it was “Weepers,” his 2015 first novel.

“Her order is on me,” Chiarkas said, and when the woman turned, frowning, he added, “I like your taste in books.”

The woman replied she would pay for her own order, which she did, then sat down at a table, opening the book.

Chiarkas took his coffee to another table. Soon the woman approached. She’d seen his author photo.

A great story, especially considering at a writers’ conference Chiarkas once described success as “when someone you don’t know buys your book and likes it.”

But the second story is even better and informs the first. Chiarkas was a fourth grader in a public school in the tough Two Bridges neighborhood of New York City. He was sitting outside the principal’s office, where his mother had been summoned. He could hear the principal telling his mother that her son had little potential and was unlikely to finish high school. A teacher Chiarkas knew was walking through the outer office, sensed what was happening and invited him into the teachers’ lounge, where she asked if he liked pound cake.

The boy nodded. “Especially the frosting.”

The teacher made tea and cut him a piece of cake, heavy on the frosting. She told Chiarkas she believed in him and offered some advice.

“Read everything you can,” she said. “And always eat the frosting.”

Years later, when Chiarkas received his doctorate from Columbia University, he tracked that teacher down. “You made this possible,” he told her. The self-belief she instilled helped carry Chiarkas from the precarious projects of Lower Manhattan to a successful legal career. It helped him while writing “Weepers” and sustained him during the long years he spent trying to write a second novel.

“I struggled every day because I felt what I was writing wasn’t good enough,” Chiarkas told me last week.

Happily, Chiarkas persevered, and this week brings the publication of “Nunzio’s Way,” a sequel to “Weepers” which can also stand alone. Chiarkas will join me Oct. 3 at Mystery to Me to discuss the novel.

“Weepers” is set on the same rough New York streets where Chiarkas grew up and references the name of the gang the novel’s teenage protagonist, Angelo, leads.

Chiarkas himself survived gang membership, then became a cop, in his father’s footsteps. One night in Central Park, Chiarkas took a gun off a man who had it pointed at the back of the head of a person kneeling in front of him. The excitement was witnessed by a man walking a small dog. Once the dust cleared, he nodded at Chiarkas. “That was pretty good, kid.”

The dog walker was the actor Burt Lancaster.

Chiarkas had a few other celebrity encounters. He worked security at Woodstock. Partly it was a function of being in New York, but while he was in the Army, Chiarkas sent a fan letter to J. D. Salinger. To his surprise, the “Catcher in the Rye” author wrote back: “I value your readership and hope to keep it.”

Chiarkas still has that letter.

He left the police force in 1972. By then he was a single dad raising two young sons and looking for more regular hours. Chiarkas went to law school and eventually moved to Washington, D.C., where for a time he was deputy chief counsel to the President’s Commission on Organized Crime. In Washington, he met his wife, Judy Olingy, who had family in Wisconsin, leading Chiarkas to apply for the public defender position in Madison. He retired in 2011 after more than two decades. Chiarkas had long been thinking about writing —dating back to his cop days — when he wrote poems inspired by the tough guy tales spun by crooks he’d had in the back of his squad car.

He took a Write-by-the-Lake class from University of Wisconsin–Madison’s estimable Christine DeSmet, who pressed for more detail: “This isn’t a police report.” Chiarkas’ chums began calling her “the mean woman at the university.” It paid dividends. Milwaukee’s Three Towers Press — an imprint of HenschelHAUS Publishing — brought out “Weepers.”

As noted, Chiarkas found a follow up novel elusive. But he was determined to give a more encompassing portrait of Nunzio Sabino, a crime boss character who appeared in “Weepers” and is based on a real figure from Chiarkas’ life.

Chiarkas thought he made Sabino too nice in the first book.

“He deserved to be a real lion,” Chiarkas says of the portrayal in the new novel. “He’s dangerous when he’s hungry.”