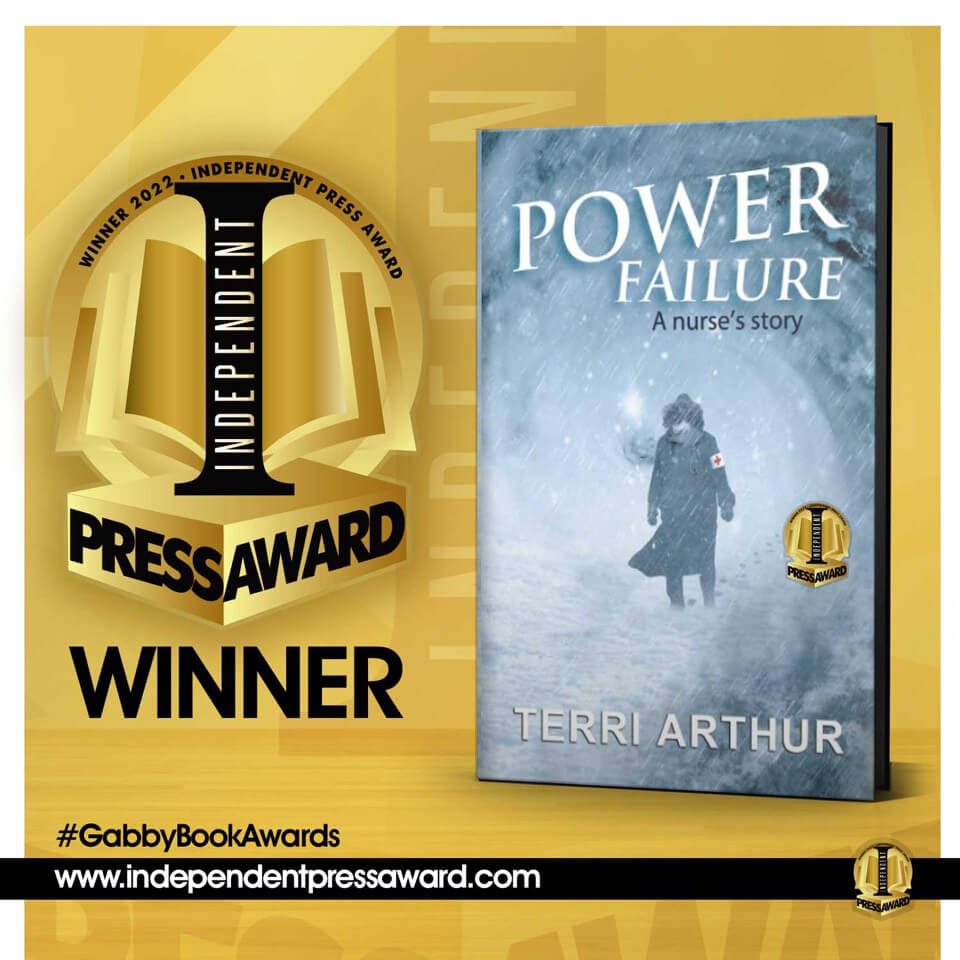 Falmouth, MA — The INDEPENDENT PRESS AWARD recognized Power Failure: A Nurse’s Story by Terri Arthur as the winner in the category Caregiving.

The competition is judged by experts from different aspects of the book industry, including publishers, writers, editors, book cover designers and professional copywriters. Selected IPA Award Winners and Distinguished Favorites are based on overall excellence.

Power Failure: A Nurse’s Story by Terri Arthur, RN This true story is told by award-winning author, Terri Arthur, RN, a retired Red Cross nurse who lived through the non-stop crises she faced while caring for patients in a storm shelter on Cape Cod during one of the most devastating storms to hit the East Coast in a century. She gives an account of unforeseen circumstances plunging many of the patients into dangerous circumstances and an erratic boss who failed to understand the crises. It’s a page turner from start to finish.

In 2022, the INDEPENDENT PRESS AWARD had entries worldwide. Authors and publishers from countries such as Australia, Canada, Germany, Ireland, Jordan, Puerto Rico, Switzerland participated. Books submitted included writers based in cities such as Anchorage to Memphis; from Berkeley to Philadelphia; Calgary to Sydney; from Albuquerque to New York City; from Princeton to Santa Monica as well as others.”We are proud to announce the winners and distinguished favorites in our annual 2022 INDEPENDENT PRESS AWARD. This year included an array of quality and diverse independent books,” Olczak said. “It’s crystal clear that independent publishing is pushing on every corner of the earth with great content.
We are thrilled to be highlighting key titles representing global independent publishing.” said awards sponsor Gabrielle Olczak.
For more information please visit independentpressaward.com; and to see this year’s list of IPA Winners and Distinguished Favorites, please visit the website pages:

About the Author
Terri Arthur, RN, BS, MS is a former disaster volunteer nurse for the American Red Cross and a charter member of the Nightingale Society in recognition for her generous support for nursing scholarship and research. For her work advocating for the health and safety of nurses, she was awarded the Kathryn McGinn-Cutler Award from the Mass. Nurses Association. The Boston Massachusetts State House awarded her with a Citation of Recognition.

Arthur’s book, Fatal Decision: Edith Cavell, WWI Nurse, won the Midwest Independent Publishers Award for Historical Fiction and was also a finalist for the Eric Hoffer Award, an international competition. It has been optioned for film.

She is a former adjunct professor for Lesley University Graduate School, Cambridge, Massachusetts and the former nursing director of SEAK, a company that provides continuing education to nurses, doctors, and lawyers on occupational health and safety.
In addition to being an author, Terri has worked as a critical care nurse, staff educator, and clinical manager. She holds degrees in nursing, education and biology and master’s in health business management. She founded and continues to manage Medical Education Systems, Inc, an educational company.

She has published in the “Journal of Emergency Nursing,” “The Online Journal of Issues in Nursing,” the “Navy Medical Magazine of History,” the “Nursing Standard” in England, and the American Red Cross on-line magazine “Nursing Matters Past and Present,” the “American Association for the History of Nursing,” and many other newspapers and magazines.