by Michael Popke
The Isthmus
December 3, 2015

Catholicism plays a central role in the debut novel from Madison author Margaret Goss, but readers need not share her beliefs in order to relate to The Uncommitted — a surprisingly dark tale of spiritual struggle.

Published by Three Towers Press in Milwaukee, this story set in St. Paul, Minn., contains references to such Madison institutions as UW Children’s Hospital (now American Family Children’s Hospital) and Culver’s, and revolves around Josephine Reilly, a 35-year-old mother of three who can communicate with the dead via dreams, visions and telepathy. While experimenting with what she initially considers a “gift,” she unlocks an invisible evil that threatens her family and drives her to the brink of self-destruction.

Beginning at about the halfway point, diligent readers will be able to put together some of the pieces and anticipate the book’s conclusion, but they should keep reading. An epic final scene set in a desolate Arizona cemetery attempts to bring closure; then Goss adds a provocative twist in the epilogue.

Read the full review at The Isthmus

Healing the Soul: Unexpected Stories of Courage, Hope, and the Power of Mind
by Bhupendra O. Khatri, MD
HenschelHAUS Publishing, Inc.
978-1595983442
Finalist in the Health: General and Self-Help: Motivational Categories

A graveside ceremony has been held at Norwich Cathedral ahead of the 100th anniversary of the death of World War One nurse Edith Cavell.

Ms Cavell served in a hospital in Belgium and treated Allied, German and Austrian soldiers.

She was executed by a German firing squad on 12 October 1915 after helping Allied prisoners escape to Holland.

Hundreds packed the grounds of the cathedral, including dignitaries from Belgium and Germany. Read more…

Heroic WWI nurse gets her due

Ten years ago East Falmouth resident Terri Arthur visited England to research the life of fellow nurse Edith Cavell, who was executed by the Germans during World War I. On that trip, Arthur wandered into a ceremony in Cavell’s hometown commemorating the nurse’s wartime heroics.

Cavell, who operated a nursing school and hospital in German-occupied Belgium, had helped smuggle at least 200 Allied soldiers into the Netherlands so they would be safe from the Germans. In August 1915, she and some of her associates were arrested by German authorities. Convicted on charges of treason, she was executed by a firing squad. 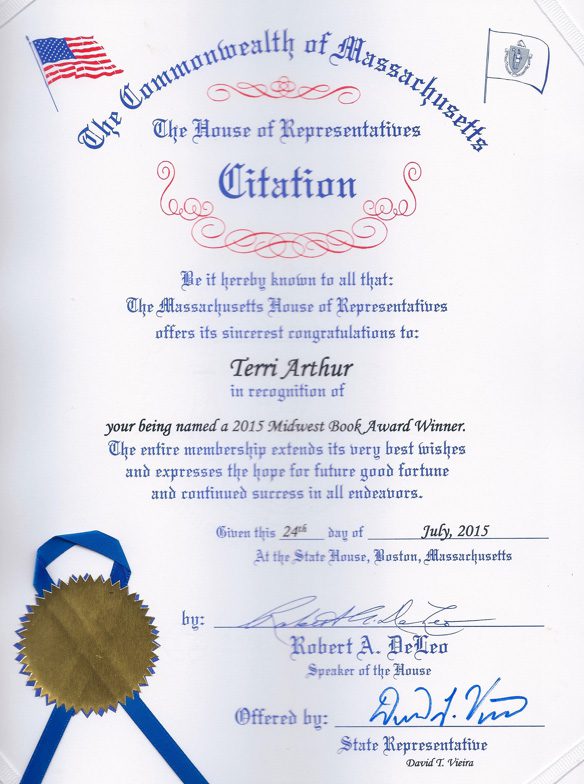 In addition to officially receiving her first place award from the Midwest Publishers Association for her novel Fatal Decision, East Falmouth resident, Terri Arthur, was also honored by State Rep. David Vieira with a Citation of Recognition from the statehouse signed by House Speaker, Robert DeLeo.
The ceremony was held on July 24th  in Falmouth and attended by over 80 friends and colleagues.  Arthur’s’ publisher, Kira Henschel from Henschel Haus Publishing in Milwaukee, WI, presented the prize.
“I am so honored to receive this award,” said Arthur. “A lot of hard work went into this book. It was well worth all the effort because it is a story that needed to be told.”
Arthur’s book, Fatal Decision: Edith Cavell WWI Nurse, tells the powerful story of the legendary Edith Cavell, a British nurse who defied the brutal German military in WWI by working with the resistance movement in Belgium to rescue Allied soldiers and escorting them to safety.  Arthur is also a Registered Nurse.
Fatal Decision is now in its second printing. The British edition is available as Fatal Destiny: Edith Cavell WWI Nurse. An audible version of the book is available on Audible.com. The CDs are due to come out in August.

Longtime Middleton resident Nick Chiarkas’ debut novel, “Weepers,” is a gritty tale of crime, revenge and redemption on the streets of New York City where the author spent his formative years.

The air was thick with pesticides and the shouts of children. Adult voices hurdled down from apartment windows. Gang members, merchants, cops, priests and mothers lived side by side, playing out their individual dramas on concrete stages of streets and stoops.

“If I close my eyes and imagine it, there is always a hint of DDT in the air,” recalls Nick Chiarkas, smiling tenderly as he envisions the housing project where he grew up on New York City’s lower east side. “As kids, we would chase the trucks that drove through the city spraying it. Elsewhere people were shouting from windows. Men would urinate in the street, between parked cars, and that was considered okay.”

The digital revolution has written a nail-biting new chapter for book publishers. E-books are overtaking their paper-bound counterparts as bookstores vanish and Amazon.com inflicts unrelenting price pressure on a time-honored trade. Read more…

Kira Henschel, owner of HenschelHAUS Publishing, has always had a passion for words, so it comes as no surprise that although her career began in technical translation, it would eventually lead to publishing.

After earning bachelor degrees in international relations and geology at the University of Wisconsin–Madison, Henschel moved to Innsbruck, Austria, in 1979, to take care of her grandmother. In 1984, she established her own technical translation company with 60 freelance translators working in 32 different languages. The team translated technical documents in the fields of engineering, business and geology, as well as several books on various topics, before she sold the agency in 1990.

The story of the death of JoAnn and Dick Deveny’s young son and its impact on the family has been a long time in the telling.

“I wrote this book 17 years ago. I rewrote it and revised it. I put it out to publishers and was rejected,” JoAnn Deveny said.

Read the rest of article 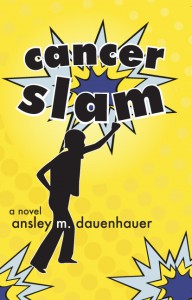 Ansley M. Dauenhauer’s first novel, “Cancer Slam” is a must-read for anyone involved with a breast cancer diagnosis. As a teenager, my mom was diagnosed with breast cancer and I had no idea what that meant for me and my family. “Cancer Slam” follow the Bennett Family through the initial diagnosis and mastectomy, to the chemotherapy treatments and subsequent hair loss. Through their journey, everyone stays extremely positive and open with one another. As a kid or young adult, it can be scary to think your whole life is going to change, especially when you are not even sure why. When Liz Bennett is diagnosed with breast cancer, she explains in the perfect way exactly what is going on in her body and how the rest of the family will be affected. Dauenhauer creates characters that are not only relatable, but who you root for and sympathize with. As a kid who has a sick parent, it’s easy to feel guilty for longing for normalcy. Hannah’s range of emotion, from anger to scared to sad to an adult-like acceptance, keep the story true to life. I laughed. I cried. But most of all I stayed positive because I think that’s what the Bennett Family would have wanted. I loved this book and believe it is an important read for anyone, not just young adults,dealing with a cancer diagnosis.

The Hide House in Bay View is home to a diversity of small businesses and studios occupied by artists, photographers, and musicians. For the past two years, Bay View resident Kira Henschel has been operating HenschelHAUS Publishing on the second floor of the venerable old complex.

What could be described as a one-stop-shop for all writing and publishing needs, Henschel’s services include coaching clients in writing and publishing, manuscript review, typesetting, book and cover design, editing, proofing, layout, marketing support, and product distribution and fulfillment. She even guides authors with book award submissions.

Read the rest of the article