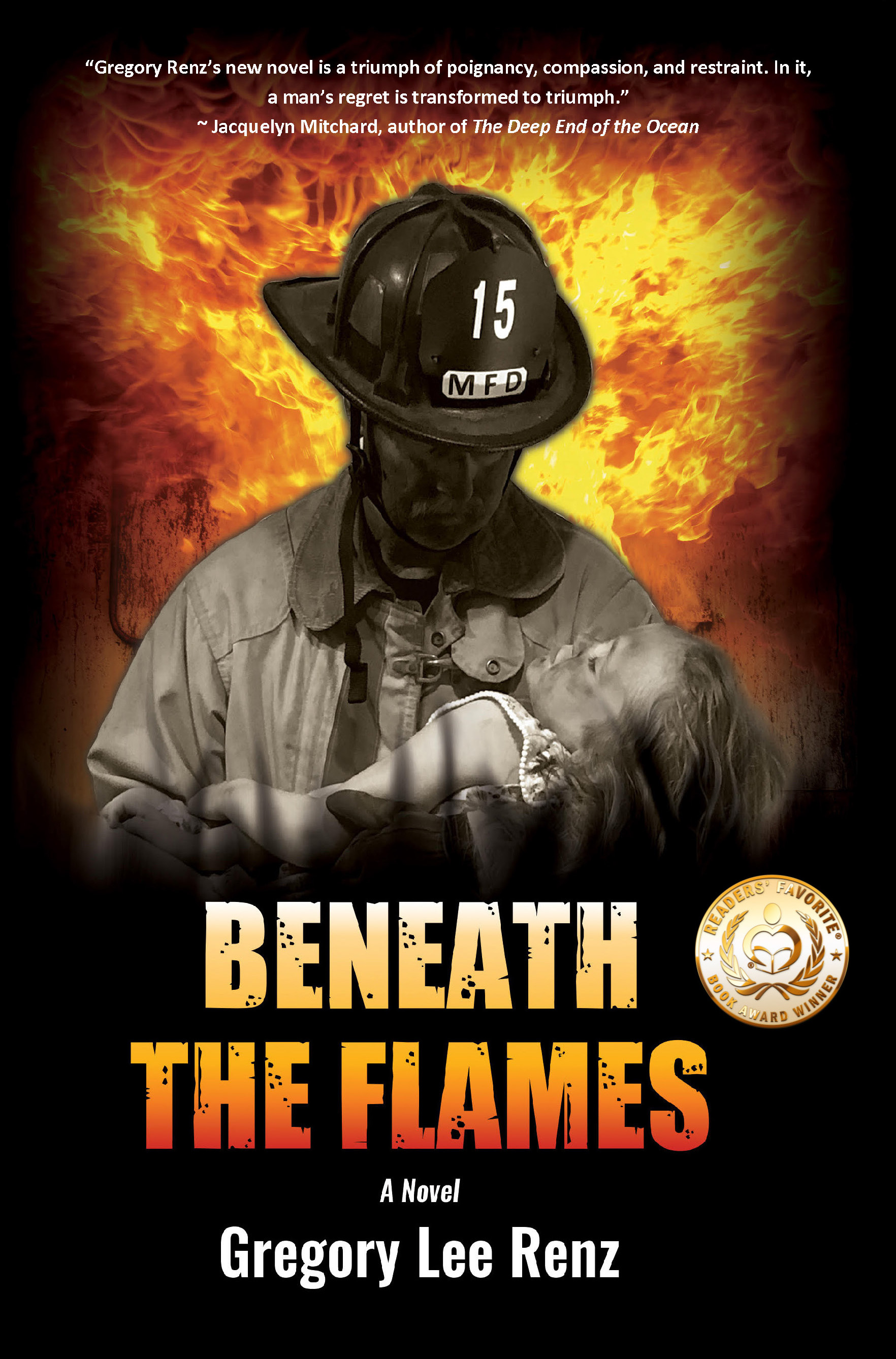 BENEATH THE FLAMES is the 2019 Gold Medal Award Winner in Fiction-General in The Readers’ Favorite International Book Award competition. Below is the five-star review:
“Beneath the Flames by Gregory Lee Renz is a mesmerizing story that brims with life and humanity, a story that explores themes of race, love, family, and an adventure within the firefighting department. The prose is gorgeous and, from the very beginning, the author had me captivated by the wonderful imagery and the lyrical nature of the story.”—Christian Sia for Readers’ Favorite.
Categories: Gregory Lee Renz, News

By Sharyn Alden Special to the Times-Tribune 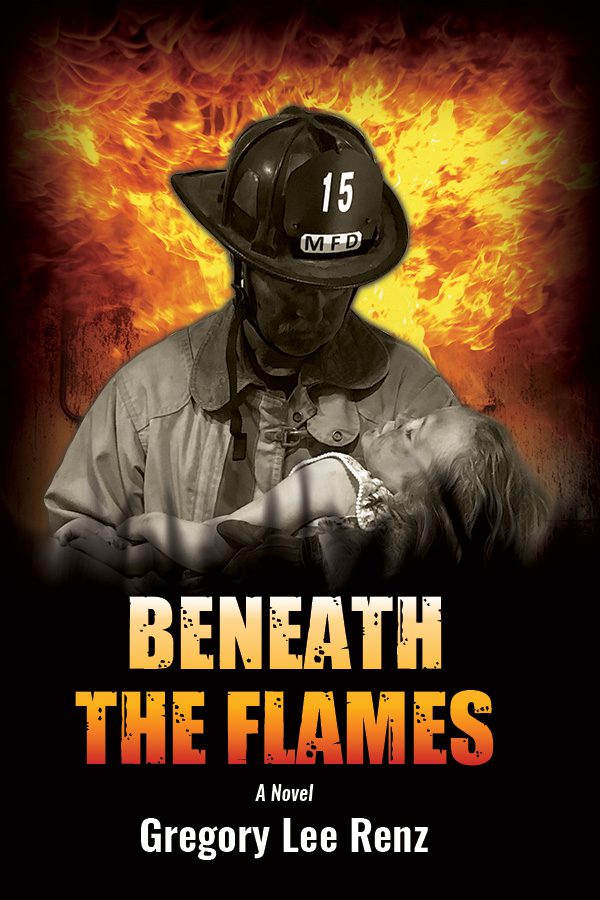 Gregory Lee Renz, author of Beneath the Flames, discusses firsthand knowledge of firefighters’ battles with post-traumatic stress disorder, also a theme in his novel.

Gregory Lee Renz, a former captain of 28 years with the Milwaukee Fire Department, has written an acclaimed debut novel, Beneath the Flames. Before retirement, Renz was highly decorated with awards for saving two boys from their burning basement bedroom.

Since his book was published a few weeks ago Renz, who has not personally experienced PTSD, has been surprised by the number of responses from active and retired firefighters regarding the topic of PTSD. It is presented in intimate detail in his novel.

Numerous firefighters have shared some of their most painful memories with him like visions of a mother draped over her small child to protect her from the fire.

A retired fire captain wrote him saying he appreciated how his story presents the topic of PTSD. At the end of his career he said he had a tough time, but eventually accepted and understood his own pain. Reading Renz’ book, he said, was not unlike therapy.

His book also addresses the PTSD epidemic in the youth of the inner city where they often witness multiple acts of violence.

Besides PTSD Renz covers other topics drawn from his years as a firefighter in his informative talks.

By Sharyn Alden Special to the DeForest Times-Tribune

For 28 years Gregory Renz was a firefighter and Captain with the Milwaukee Fire Department, and he called it, “The best job in the world. It was my passion,” he says.

On a cold night in December a few years ago two young boys were extremely fortunate that Renz was able to save them.

The building where they lived was on fire and thick with smoke when he made his way down a smoke-filled stairwell to the boys’ basement bedroom. “I couldn’t see a thing but I knew I couldn’t live with myself if I backed out,” he says. “You train your mind to slow down the rush of adrenaline and focus on the situation,” he says.

He found the little boys unconscious and not breathing.

“When I picked them up they were lifeless, like rag dolls,” he says. “I brought them up the stairs and outside but feared the worse. Miraculously, they were resuscitated on scene by paramedics and transported to the hospital where they recovered with no lasting effects.

For this rescue Renz received the American Legion Medal of Honor, the Fire Rescue Class “A” Award from the Milwaukee Fire Department (their highest award), the Heroism and Community Service Award from Friehouse magazine, the Red Cross Brave Hearts Award for Emergency Response Hero and many other accolades.

Since retiring from life as a firefighter, Renz has turned his experiences into his debut novel, “Beneath the Flames.” “The story is about a guilt-ridden firefighter and a courageous twelve-year-old girl who join forces in the fight for their lives,” says Renz.

He will discuss what prompted him to write the book that has been creating a buzz since its release in late May.

It took eight years of creative writing courses, workshops, conferences, and countless drafts, before he finally typed, “The End” at the completion of his manuscript.

On the cover of his novel, the photo depicts Renz holding his granddaughter. That dramatic scene (staged) epitomizes the vivid human interest themes inside the cover.

“Gregory Renz’s new novel is a triumph of poignancy, compassion, and restraint. In it, a man’s regret is transformed to triumph.” –Jacquelyn Mitchard, author of The Deep End of the Ocean.

The author draws on the power of forgiveness, hope and redemption in telling a compelling narrative.

He adds that when people from diverse backgrounds work together in challenging situations, they come to realize that we all have the same hopes, dreams and fears. “The walls of ignorance and bias crumble. There is no longer us and them; there is only us.” 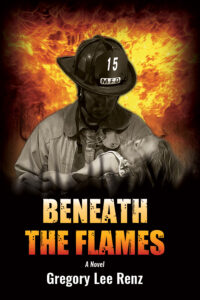 After 28 years of working for the Milwaukee Fire Department, Madison native Gregory Renz has seen a thing or two.

Renz was a fire captain in inner-city Milwaukee, often encountering much more than dangerous fires — though he certainly saw his share of those. Renz observed how poverty, racism and social injustice divided one of the most segregated cities in the country.

When Renz retired in 2008 and moved back to Madison, he thought about all he had experienced, particularly a dramatic rescue in which he saved two boys from the basement of a burning building on Dec. 6, 2004. He’s shared the story several times, including when he was honored for the rescue and inducted into the Fire and Police Hall of Fame in 2006.

“When I shared that story, I saw tears coming down people’s faces,” Renz says. “It hit me: the power of a story and how it can move people.”

In retirement, Renz took up writing. It took him nearly 10 years, but on June 1 he is launching his first novel, Beneath the Flames (Three Towers Press.)

The novel follows farmer and volunteer firefighter Mitch Garner’s journey to salvation after he blames himself for a devastating loss of life at a fire in his small, rural Wisconsin hometown. Garner falls into a depression and decides the only way to redeem himself is to be somebody else’s hero.

He applies for and is accepted into the Milwaukee Fire Department, where he confronts a culture and community he knows nothing about. Then he meets 12-year-old Jasmine and her little sister, Alexus, through the department’s mentoring program.

“They are as far apart culturally as you could possibly get, and they don’t understand each other,” Renz says of his main characters. “Jasmine starts helping him [Mitch], and this huge racial divide starts narrowing.”

Renz’s debut novel tackles such themes as forgiveness, redemption and family. It also provides a behind-the-scenes look at a fire department, as Doug Holton, a retired Milwaukee Fire Department chief who worked alongside Renz, points out. He says Renz’s book was a “realistic portrayal” of how racism plays out both in the city and on the staff. “His book is very dynamic,” Holton says. “People have a perception of firefighters that they’re heroes. But when the door is closed, and you’re living with somebody for 24 hours, what’s going on?”

Those dynamics are what make the story work, according to writing instructor Christine DeSmet, who coached Renz in writing classes through UW-Madison’s Continuing Studies program. “Greg relished the revisions that helped him hone his storyline and characters,” DeSmet says. “He seemed to be a treasure hunter with his own material. He loved scraping away at words to find even more emotional depth for his characters.”

She says the novel is packed with emotional twists and turns, weighty themes and humor. “They say a novel is only as good as its ending,” Desmet says. “Greg Renz’s debut novel has one of those thought-provoking endings that doesn’t leave a reader. I suspect a lot of readers will be asking, ‘When’s the next novel coming out?’”

Renz is working on it. He’s drafting ideas for a second firefighter-themed novel. He’s got more stories to share.