The Times of Israel
Jeffrey N. Gingold is the internationally acclaimed and award-winning author of

You are at risk, if you don’t listen to the authorities and follow their instructions.  Outside of the family members living in your home, avoid:  being close to other people or collecting in groups; stay away from public gatherings and remain at home; avoid religious gatherings; no school or educational assemblies in person.  Of course, we are talking about recommendations to avoid a virus?  Or are we remembering shards of Warsaw Ghetto shadows? 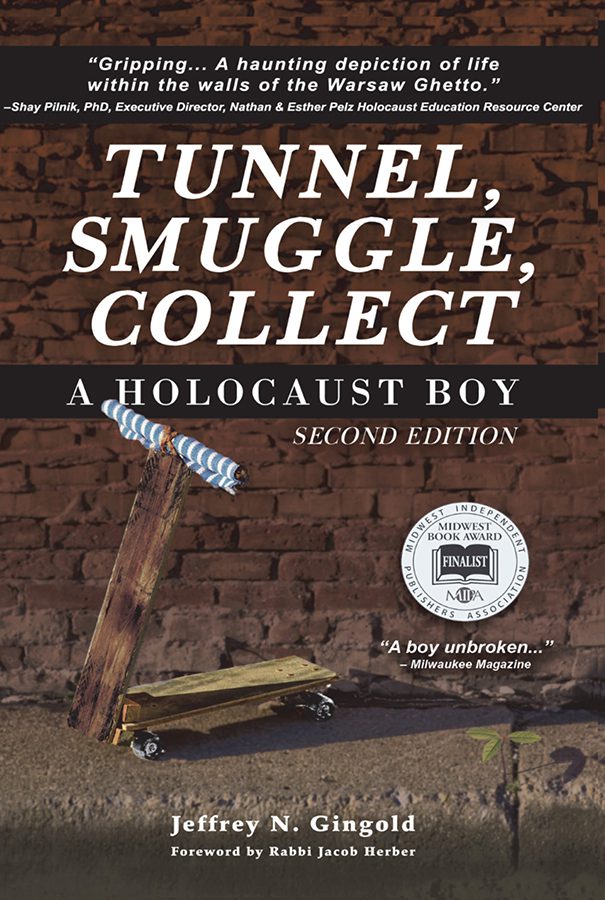 I have never compared my existence to my father’s life as a child in the Warsaw Ghetto.  The differences are decades apart, but in the 2020 pandemic there are echoes and common lessons of fear, taking care and grasping hope.  Beyond new health awareness concerns, I still have little to complain about.  Social distancing and the resulting isolation are new and difficult, but it’s for my well-being.

Instead of worrying, it is time to stay busy with de-cluttering, home projects and walking the neighborhood.  However, we cannot gather, celebrate, mourn or pray in person with others.   While appreciating the temporary losses of personal routines, hope is now discovering new means of technological connections.  Zoom away.

There are real and significant costs from the disruptions, but when re-scheduling life events, it means that they can still occur, so relax.  The demand for certain common products, usually ignored in the background of life:  toilet paper, wipes and sanitizer may be an ironic re-prioritization, but we will learn to compensate.  Wash your hands with soap for twenty seconds and again, relax.  Daring to compare today to my father’s childhood in the Ghetto exposed me to a fresh view of the current reality, adjusting my perspective.

Our neighborhood sidewalks are not over-crowded with refugees from German occupied lands.  The walkways are quiet, except for the sounds of birds and wind-blown branches.  Our hair is not shaved to deter accumulation of lice.  Although the loss of hair coloring means the return to our natural hair color, any color of growing hair [even grey] is still healthy.

We are concerned for life, but no person from an occupying force is trying to kill us.  It is difficult to fathom the current loss of control, normally assumed by a free people.  True.  Our lives, careers and homes are disrupted, but we have shelter and a neighborhood free of an occupying foreign army.  My family doesn’t climb through bombing rubble to walk to the park.  And the public parks are open to us all.  There are inconvenient shortages, but there is food in our cupboards.  We are not starving from government imposed rations, limiting caloric intake based on our religion.  They will fully restock our grocery store shelves, eventually and we are free to shop there.

In the Warsaw Ghetto, Jews were forced to wear a Star of David arm-band in public, as a mark of restriction. With a virus, we are marked by wearing medical masks and arms-length distance.  The current virus offers a trade for enduring staying at home for several weeks to avoid incidental contact with the virus.  Six feet social distance doesn’t really sound difficult.

For years in the Ghetto, five members of my family lived in one tight room with no electricity, plumbing, heat, bathroom, kitchen or door. And there was a baby too. On the day Warsaw was bombed in September 1939, my grandmother went into labor with her second child. Forced into slave labor for the German war machine, adult men faced heavy burdens and often violent deaths seven days a week. My grandmother, aunt and the baby [Baruch] could never venture past their basement room. If they were outdoors, they risked a severe beating forcing them into a labor truck. Any comparison with being self-quarantined in my Milwaukee home falls way short.

So what did my father learn in the Holocaust? His story was a childhood that would never occur and he had company. A contributor to Emanuel Ringelblum’s hidden archives lived in an attic apartment with his wife and young son, above my father’s unit in Warsaw. When the Germans bombed the city the young boys never saw each other again.  When the apartment building took a direct hit from a dropped bomb and the building’s guts and residents were blown out into the street, my father’s life was moved to the edge where the future was canceled.

My father could only think about getting to the next day, which gave him the nerve to do what needed to be done without attention or sympathy.  It was about being invisible under the most horrific conditions in order to smuggle for food, collect the dead on the streets and tunnel to escape.  Maybe I can learn a bit from my father’s Ghetto existence to avoid close contact or public locations, but the reasons pale in comparison. This may be uncomfortable now, but I refuse to complain about the temporary restrictions in my life.  I just can’t.

Instead, I see more clearly those who quickly enter and exit my day. When a functioning economy is vital, they are there and shouldn’t be ignored. Exposure to the pandemic is too easy to take anyone for granted. What was formerly “just doing a job” is now a death-defying activity.  Just servicing customers, moving products and being exposed to others is brave.

When the virus is gone and life priorities shift again, who will we be when the next “normal” returns? We may share just a bit in common with Holocaust survivors.  When this virus is resolved and we return to complacency, I will better appreciate simple things and smile.  Restrictions for our own good are still restrictions, but with perspective we can accept them as they are intended — life-preserving. That’s our freedom too. Thanks, Dad.

PrevPreviousWriters@Work: An Interview with Karen Voss
NextWhat FDR Did That Addresses the PandemicNext